The Day the Pond Went Dry 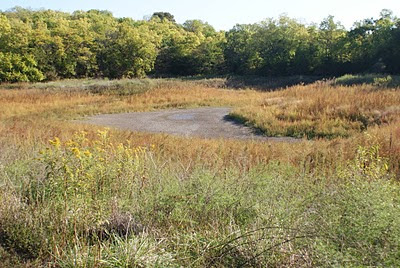 September 27, 2011.
The pond is officially dry.
While the middle is obviously muddy, no pool of water remains. Not a single puddle.
Instead of an ugly hole, it is like an impressionist painting. The horseweed and other things that have been growing below the usual water level are afire with autumn's passion. This is surrounded by green trees, green grass and weeds and wild flowers.
We have watched the water pool diminish all spring and summer.
The pond leaks. We've known this ever since the first time we went to our place after signing the deed. 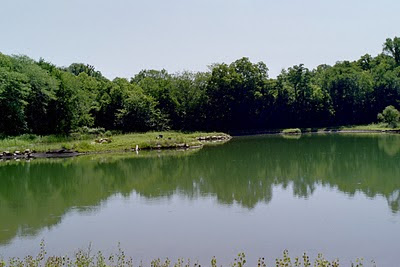 This is how is looked that first summer, July 2007. You can tell, if you look closely at the shoreline, that the water was receding. 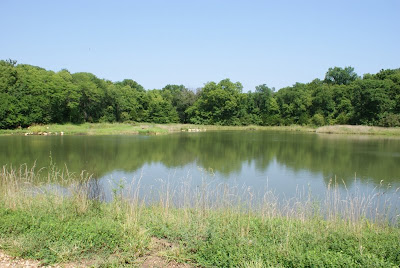 The summer of 2008 must have brought more rain than the year before, because in July 2008 it was completely full. That fall, (or was it fall of 2009?) after the water level had fallen low, we finished pumping it dry -- much to the chagrin of thousands of crawdads and frogs. Then we hired an excavator to attempt a patch using bentonite clay. The springs that feed the pond began running again in February and we had a full pond all spring and summer until the springs stopped running sometime in late summer and the water level dropped but did not go completely empty. That was the way it was... until this year. Only one spring ran briefly in March or April, after some heavy rain. The pond filled a bit, but then started draining again and continued until the last puddle was gone today. 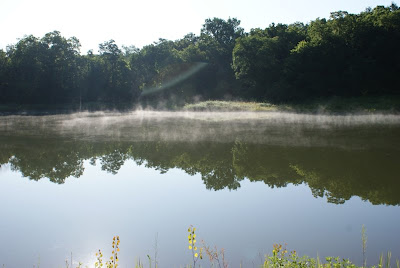 The pond has provided many picturesque moments. In July 2009 (above) I attempted to capture mist dancing on the surface. 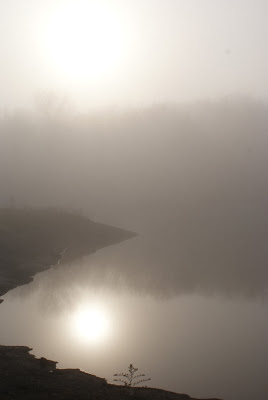 And again, November 2009, in a soupy fog -- a scene worthy of any Arthurian-legend movie.
The exposed mud, in my mind, gives the impression of a seashore, where tides and waves keep the edges scoured of vegetation.
In reality, the water level had just dropped over the previous months.
In some ways, the annual draining made the pond more usable. We cannot depend on it for irrigation in dry years, obviously. However, as the pond drained in late summer and fall, the exposed area gave us better access. When granddaughter Ivy (then age 2) came to visit last fall, we walked to the water's edge and laughed as the frogs each gave a screeched and hopped from the shore into the water with a plop. We tossed in sticks and stones.
Every visit to our house elicited cries of "Let's see the frogs!" until it was too cold for the frogs to be out. 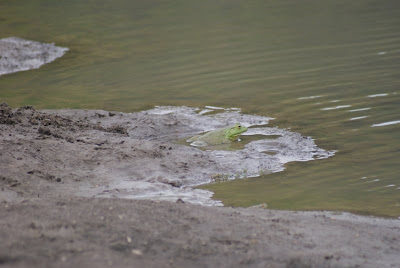 The frogs have now abandoned the place. And the crawdads? Many became breakfast, lunch and dinner for blue herons that visited more and more frequently as the water receded. I am sure that raccoons and other critters also held great feasts.
Where does the water go as it leaks out the bottom of the pond?
Good question. One we probably will never answer.
Will we try to fix the pond again, now that it is dry?
That is not in our immediate plans. We were warned the first time that fixes rarely work. But maybe someday, when the stars are alligned just right... then again, maybe not.
Sometimes you just have to accept things the way they are.
Posted by Sandra M. Siebert at 10:32 PM