Autumn is a perfect season to start planting again. New cabbages, lettuces, broccoli and such have been in the ground for a month. Now I am transplanting perennials from one garden to another and today planted new blueberry bushes.
We love blueberries and eat these antioxidant-nutrient-rich berries every day. So planting them on our homestead seemed a natural thing to do.
However, growing blueberries in Kansas is no small feat. 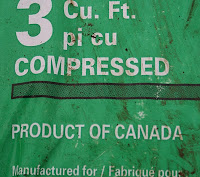 First you must create the appropriate soil acidity. Kansas soil pH (acidity-alkalinity) hovers around the neutral zone (6.5 to 7.5 pH) and blueberries require quite acid soil (5.5 or lower). Instead of trying to amend the native soil to match that low pH, a local grower recommended that I plant my blueberries in straight peat moss.
She also cautioned me to get only Canadian sphagnum peat moss, as the stuff from the other U.S. source does not have the appropriate pH.
Blueberries do not have extensive root systems, so you don't have to replace a large garden area with peat moss. Just dig a hole large enough to contain 1.8 cubic feet of sopping wet peat moss and you are good to go. 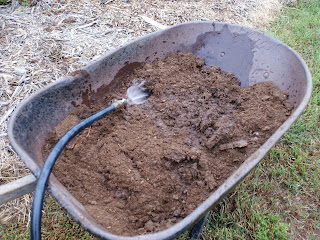 The peat moss must be sopping wet before you put it in the planting hole. Otherwise, it will be quite difficult to saturate it. I mix the peat moss and water in a wheelbarrow. It must be stirred (not shaken) with a shovel to thoroughly saturate it. This is the hardest part of planting blueberries. It takes quite a bit of water and a lot of stirring to fully saturate the moss. Do it in two smaller batches as this makes the job easier.

Mixing it in a wheelbarrow makes it a simple task to dump the peat moss in the hole. If the peat moss does not entirely fill the hole, get more peat moss. Do not add native soil to peat moss or put it over top of it, as that will change the pH.
Plant the blueberry and put a thick mulch in a 2x2-foot area around it and you are done.
Done planting, that is.
Blueberries want good drainage, but require lots of water -- 3 to 5 gallons per plant at least twice a week during the growing season when the temperature is above 70. I dutifully watered my blueberries twice a week all summer. They all survived, although some obviously suffered. You must keep up the watering schedule through Thanksgiving (late November) or until the first snow cover -- whichever comes first.
When I picked up four more (really beautiful) plants from the grower at the farmers market recently, she told me that twice a week watering was a minimum. She watered her blueberries every day during the intense heat we had in July and early August. That is commitment. Her farm has 30,000 blueberry plants.
Blueberries also need regular feeding. The sheet of instructions recommended horse manure tea (5 parts water, 1 part manure, steep for a few hours and pour on liquid) or a commercial organic fertilizer called Holly Tone (1 cup per plant) once a month March through August. Apply in a 6-inch ring around the plant. The grower emphasized that once a month feeding is a minimum. As with the watering, more frequent feedings are sometimes needed. Unfortunately, I did not feed our blueberry plants at all this summer. Yet, they survived and most put on new growth.
Blueberries are not for the lackadaisical gardener. They require frequent attention. However, blueberries are long-lived, not reaching maturity until they are 7 years old. The bushy plants can range in size from 5 to 8 feet tall and will produce pounds and pounds of berries for years -- when properly tended.
People like blueberry pies, cobblers and jam, but we just like them raw. So when we have more than we can eat all at once, we'll just toss them in the freezer.
Our 15 blueberry plants should give us plenty of berries when in peak production. We have a variety of cultivars, with early and late producers in the mix. So when a 3-year-old granddaughter who loves to eat blueberries comes over, she has a long season in which to help pick them. Unfortunately, she won't stay 3 forever. Yet the blueberries will be there for her.