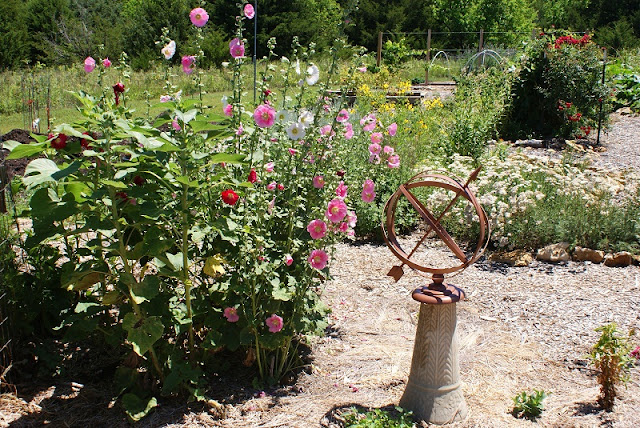 A lovely thunderstorm rolled through last night as we were getting into bed.
Thank You!
An inch and a half all in one storm. Yay! Our water tanks are full to the brim and I won't need to water ANYTHING for a few days.

It was lovely walking through the garden this morning, with the mulch in the paths damp and dark and all of the plants drinking to their hearts' content.

Um... um... well...
ok???
Some seed for a cover crop of oats and buckwheat... wish I would have gotten it all in before the rain.
Can transplant some of the lily of the valley that is in the way of our planned site for bee hive #2.
Should probably stop there.

The perennial gardens look like July and August right now. So many things that would only just be winding down their blooming right now have been cut back and deadheaded for a while.
The zinnias are blooming in the cutting garden. What happened to the Giant Benaries? None of the zinnias are giant.
The okra plants are blooming and putting on pods, even though they are only a foot tall or so. ????!

The heat has caused so many things to mature and bloom before they reach full size. Can't seem to stop it, so flow with it. The Belgian Red peppers have nice fruit (not red yet, though) and the tomatoes have little green fruits. The the first planting of cucumbers is blooming. And the season moves on... a little easier now that we've had a bit of rain.
Posted by Sandra M. Siebert at 1:47 PM